The world needs more cheap booze.  Wine and beer are damn expensive. Clearly, the answer is to make your own.

I’ll come clean, to start with:  I am not a winemaker.  I am a total amateur.  BUT, you can use ingredients from the supermarket, equipment from a car-boot sale and be up and running this weekend for the same price as a bottle or two of wine from Asda… and after about 3 weeks you’ll end up with 15 bottles of the good stuff.

So how do you do it with no prior knowledge without it tasting flippin’ awful?

Really the process is simple. Fruit/grape juice is sugary and yeast breaks down sugar into alcohol and carbon dioxide.  If you make a sugary fruit cocktail and add yeast, you will get an alcoholic drink (wine!)  and a load of gas after a few weeks.  If you add an airlock so it can release the build-up of carbon dioxide then it won’t explode, either, which is nice.

The total expense for the equipment was well under twenty quid for a big load of stuff which can be used and re-used again and again.

Of course, you also need some fruit juice. Most supermarkets do multibuy offers on litre cartons – alternatively their budget range might be cheaper still at about 65p a litre, though is usually limited to orange and apple.  I make the total cost per gallon to be approximately £2.50-£4 depending on your choice of juice and not counting the initial (modest) outlay on equipment.

You can get creative with the flavours you use.  I have stuck to a 25% – 50% grape juice for each of mine, then added different flavours on top.  You don’t need to use any grape juice – it’ll all ferment, just the same, but if we’re making wine then lets at least pretend we’re doing it properly!

GETTING YOUR BREW ON!

The process is easy. First and foremost: Everything (INCLUDING YOU) needs to be clean and sterile.  Clean it and clean it again.  If you get this bit right, there is very little that can go wrong.  Yeast turns your sugar to alcohol but it also turns a little bit of dirt or left-over sediment into mould, and then your wine into vinegar.  I used Wilkos Bruclens to sterilise everything.  A £1.60 pot will do enough bits and pieces for two or three gallons of wine.

The first day will be fairly slow, so don’t worry.  There will be a few bubbles but nothing dramatic.

After that it will pick up and start to resemble a lava lamp with sediment moving up and down and the airlock will bubble away.

After 2 weeks the fermentation slows to a crawl, so now’s the time to tip or syphon the wine into a new (sterile!) container, leaving the sediment behind as much as you can.  If you syphon, then simply don’t put the tube to the bottom of the demijohn; if you pour then just do it in one smooth motion and leave an inch of muddy sediment behind.

After WASHING MY HANDS (this is important) then I put my hand over the demijohn and give it a good shake, then released the gas, then again, then again.. like opening and closing a pop bottle… until no gas was coming out after a shake.  The wine is now flat, but cloudy.

You can bottle it like this and leave it to clear in the bottles (and get another batch going!) or let it sit for a week or two so the remaining sediment can fall to the bottom of the demijohn, then bottle.

My recipes have been pretty simple so far, with the results being lovely:

I only used my hydrometer for the third and fourth batches, which gave potential alcohol readings of 13% and 14.5% respectively (they’re still in the demijohn, frothing away).   The total time from start to bottling is around 20 days – less if you drink it cloudy.

So far, Batch #02 above has been the favourite – a lovely rosé with a kick.

Starting off… a few bubbles 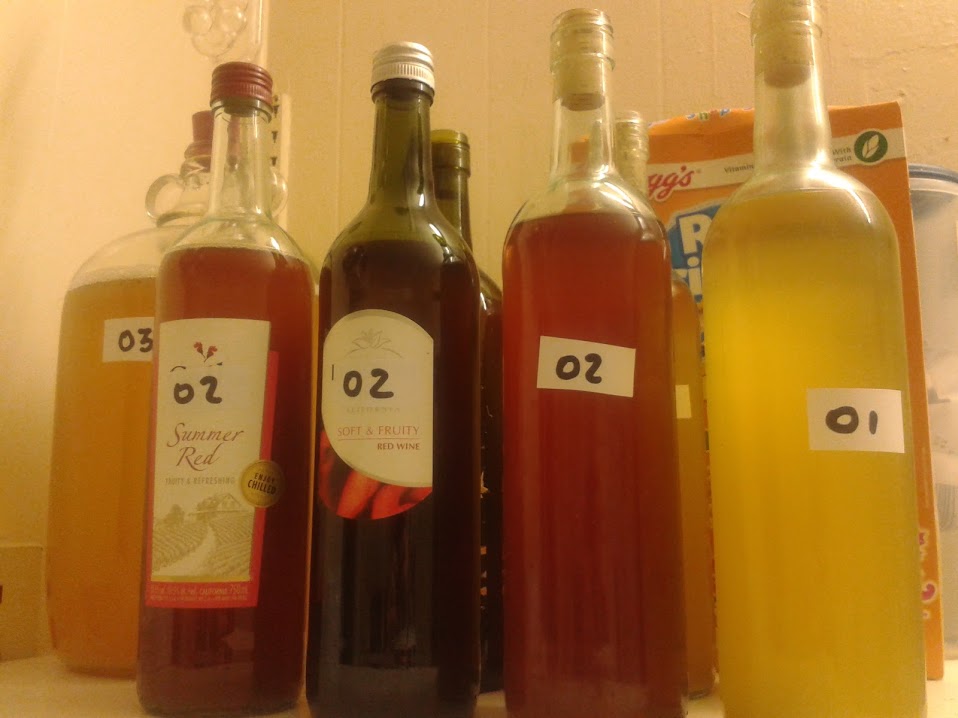 Batches 1 and 2 bottled and beginning to clear, batch 3 in the background bubbling away…

Search for something… animal, vegetable or mineral!